Cooling Off In Uttarakhand

The last time I was in Ranikhet, I was Phoolan Devi with her band of followers, plundering fruits from the not so amused caretaker’s garden. Not content with sour pomegranates and unripe guavas, we the bachha party devised a clever strategy (okay it was my brainwave) to pillage Amulspray -sweetened milk powder for adults but manna from heaven for us, from the kitchen. To hoodwink the parents, we would pretend to have a loud dancing session behind closed doors of course. The youngest was assigned the duty to sing loudly, while I would shovel spoonfuls of that sticky gooey stuff in waiting mouths. Oh, that was when Ranikhet was still part of Uttar Pradesh and not the newly formed Uttarakhand and I was barely 13. 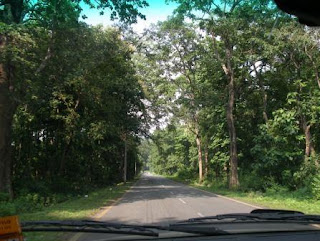 I was revisiting Ranikhet after 29 years, with my husband and my 16 year old daughter. But this time, it was not going to be just Ranikhet but a road trip through Uttaranchal- an eight day tour that would take us through Ramgarh, Kausani and end at Ranikhet. We had almost cancelled our trip, with Uttaranchal being savaged by the heaviest rainfall in 40 years. Severe landslides had blocked off most of the roads and the floods in the plains had washed off chunks of the highway. But where there is will there’s a way, so what if we have to make constant detours and add couple of extra hours to our journey. 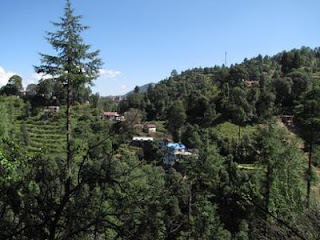 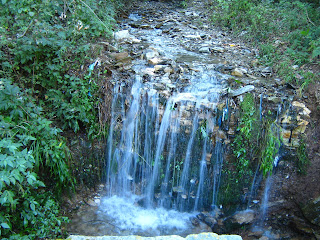 It took us ten long hours to reach Ramgarh, a picturesque hamlet near Mukteshwar. The parents have their cottage there and had reached a day earlier. This was supposed to a great family re-union on hilly terrains. It is great to reach a home and the comforting warmth of parental affection after a long gruelling drive. Curled up on the sofa sipping freshly brewed tea and listening to the pleasant banter, mostly centered on what we will be having for dinner, has a great unwinding effect. Standing on the balcony, one can hear the gurgling of a brook meandering through the forest below. The hilly slopes are a riot of colours with Chrysanthemums growing abundantly. In summers the trees are laden with apples, nakh and plums. I know because I’m forced to eat the sour, fresh off the trees specimens at our Delhi home. My heart soared with pride as we watched the opening ceremony of the Commonwealth games in far off Ramgarh, although I did feel a bit let down by the Rahman induced cacophony. The man needs to rejuvenate in the solitude of hills. 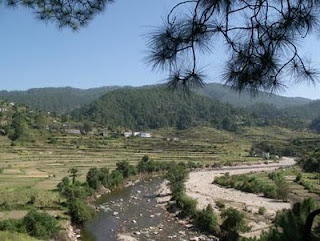 Two days of motherly concern translated into a lot of eating, the fully fed-up Rays were on their way to Kausani. Located nearly 150 kms away, it’s a long drive. But what made our journey a pleasure was the sheer beauty of the hills. Green slopes dotted with majestic looking trees, wild flowers growing in every nook and corner and the sheer diversity of the flora takes you by surprise. From giant cactus jutting out of treacherous slopes to stately Deodars to mango and banana trees, we saw it all. And if the rains have melted slopes and brought trees crashing down, they have also replenished many a stream and waterfall. We stopped at Ranikhet to stock up on Bal Mithai, a delightful sticky fudge made with caramelized milk. The journey to Kausani was even more enjoyable with us hitting valleys and driving through pretty hamlets. The huts looked clean and pretty with rose shrubs and petunias jutting out of unassuming corners. And as we drove up the hills, we were greeted with the sight of a wild river gushing between the gorges. The Kosi river that followed us through most of our journey, is an unusual green. Gushing over rocks & pebbles, moving determinedly ahead and settling unexpectedly in deep serene pools, as if to take a breather – we just couldn’t take our eyes off its antics. The mother-daughter duo almost fell off the car in their eagerness to capture the beauty of the gorgeous Kosi. 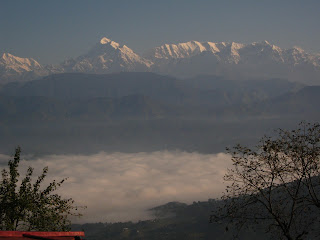 Kausani is a small hill station with a non-descript market, but what makes it stand apart is the spectacular views you get of the snow clad Himalayas. You can spend hours soaking in the magnificence of the mountains that look as if they’re straight out of a picture postcard. A rain soaked evening had the husband craving for pakoras and we spent nearly an hour hunting for a mithai shop that would serve fresh off the kadai pakoras. We saw signboards for maggi, “coffie”, violently coloured ice-cream (courtesy Vadilal) even batter tosht, but the humble pakoras it seems have gone into a permanent hibernation (nobody but bored city dwellers want them, so why bother!). 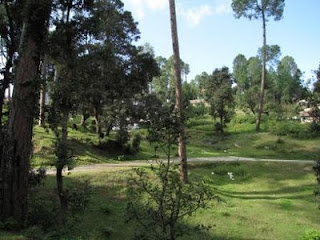 Ranikhet on the other hand has a special fascination for Kurkure and grocery stores. Nowhere in the world have I seen so many grocery shops concentrated in one single market and all of them stocked up with zillions of cartons of Kurkure! That said, Ranikhet is stunningly beautiful with its gentle sweeping slopes and lush forests. Our hotel, a heritage building (previously a club for British officers) was on the Mall road, far, far away from the grocery obsessed market. Now when you think of mall road, you conjure up images of a lively street dotted with bustling shops. The Mall Road in Ranikhet is located in the middle of nowhere, surrounded by forests and a few well hidden resorts. Nice... how peaceful... how close to nature are we...all we can hear is the swishing of the trees and the chorus of the insect population...this is bliss. But this euphoria was short lived. The Ray family were the only guests in that abominably large hotel with ceilings that touched the sky and rooms large enough to play football in. As night fell, we got seriously spooked imagining dead Brits doing a waltz with their fair ladies (didn’t bother asking the husband, who was too busy anyway hunting extra large sized spiders). If Papa Ray were to write a post on Uttaranchal, he would dedicate it to his spider hunting frenzy- a Hit spray can in one hand and a chappal in other, from Ramgarh to Kausani to Raniket – his focus was on spiders crawling in remote corners. Like Terminator he had to annihilate them all. 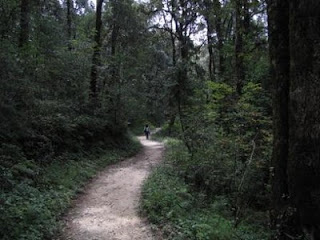 The weather in Ranikhet was slightly nippy and we would spend hours trying to get lost in the woods, the father-daughter duo busy clicking wild flowers from all possible angles. Walking in and around the mall road located in the cantonment area is a delight, if you don’t mind the monkey population. By the end of our stay, we had become Scrabble champs, had tasted everything that our hotels’ chef could cook (bless that guy), exchanged meaningful conversations with our maitre de and also managed to sneak in a game or two of badminton (we were eyeing the carom board as well, but didn’t get enough time).

When we finally got back to Delhi, I couldn’t stop that feeling of exhilaration creeping in. It did feel great getting back to civilization (shame on you city brat). But I can’t help it can I? Delhi looks so gorgeous decked up and spiffy with its 2800 cr makeover for the Commonwealth games. For once I felt proud to be a Delhite. Distance I guess, makes the heart grow fonder. 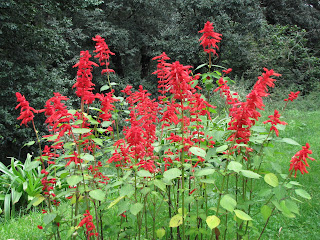 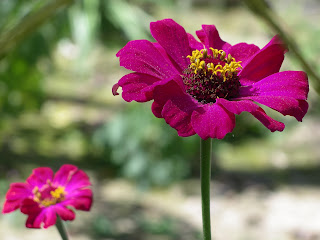