It all began with an Apple that tempted Adam to sin. And now thanks to the self appointed guardian of Indian youth, we have a mint fresh perpetrator of the Original sin. Before Levis introduced this denim wonder to the world, it was just another fuss free pair of lowers preferred by cowboys for its rough and tough nature. It soon caught the fancy of millions across the globe. Jeans – the most versatile garment, practical yet stylish, comfortable and timeless – has been a fashion statement for generations. You can never go wrong with a pair of well fitted jeans and a white shirt.

Mr Subhash Ghai begs to differ – he thinks wearing jeans corrupts the youngsters and makes them do bad-bad things. Just like the quintessential bad man Gulshan Grover. Kids, it’s time you listened to the modern day Gandhi. If your forefathers followed the Mahatma’s clarion call and happily burnt British made clothes, it’s time you dumped your distressed, ripped, riveted, tattered, patchy, grimy, skinny pairs. Go build a mean bonfire and later you can imbibe lofty values by watching Mr Ghai’s movies. Karma, Ram Lakhan, Pardes to perfect the art of hamming. Good Boy, Bad Boy for how not to make a movie. And for a soul searching experience try catching the tuneful “choli ke peechhe kya hai”. In the early 90’s Mr Ghai had sent the nation into a state of introspection by asking this profound question. Of course he had Ms Dixit giving ample hints on the 70 mm screen. But the dumb nation we are, we failed to comprehend and watched it again and again for a deeper insight.

The prolific filmmaker gave this emotional speech on the evil nature of jeans at the International Film Festival in Goa. His state of mind is understandable though. All through his stay in Goa he did not spot a single fully clothed person. At Anjuna, it became worse. No wonder Arundhati called my Bharat a “bhooka nangaa Desh”. And later as he was watching F TV to calm his agitated state of mind he saw Eva Mendes writhing in the sand in her Calvin Kleins. Haujee! Now I know what causes global warming - all these hot, evil people with and without clothes. 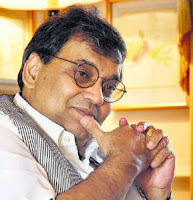 Mr Ghai by putting the blame squarely on jeans has managed to kill two birds with one arrow. He has finally unearthed the root cause of corruption and we will soon be saying bye-bye to global warming. India will finally be a cool country to live in.

The filmmaker is now at the receiving end of much love and adulation. He got a wet, slurpy smooch from VHP. Shiv Sena has already dispatched six dozen bunch of roses, with an emotional “I love you to death” note. Khadi gram Udyog has received order for bales and bales khadi in pink shade. The gen now is getting extra large sized vests with matching drawers stitched especially for the wearing pleasure of their beloved Mr Ghai.

Muthalik move over, the pink chaddi just got a new candidate.
Posted by Purba at 7:18 PM

Email ThisBlogThis!Share to TwitterShare to Facebook
Labels: Sarcastically Yours