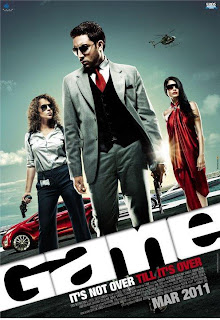 I have a confession to make – I watched Game, first day, first show, on April fool’s day.  Of late I have been feeling a bit reckless. After the Ravan fiasco watching Bachhua’s movie is always risky business. Me, I hate taking risks alone and I’m always looking for co-victims. So, I laid out my trap, dangled a few carrots, made sickly sweet promises and managed to trap not one but two bakras.
In the morning when I read Game’s review in the TOI, my heart sank deeper than the Titanic.  When someone like Nikhat Kazmi, a critic who praises every trashy movie under the filmy sun, pans a new release – you can’t help but feel distraught.  Geez what have I gotten myself into.  Should I turn up my collar, look shady and try to sell my tickets to unsuspecting strangers?  Tee and Cub will kill me with their whining. Aww c’mon it has Farhan Akhtar at the helm of matters, it can’t be that bad!  After a long animated discussion with me and myself, it was decided that we will go ahead like the crew of Star Trek – to boldly go where no man has gone before. Aye aye captain!
The hall was packed if you didn’t look beyond the last three rows and I had two smelly men who were in love with the sound of their voice sitting right next to me.  In my sternest school teacher voice, I asked them to shut up or move to the front rows.  It worked like magic.
Game, directed by Abhinay Deo is a suspense drama.  A billionaire, Kabir Malhotra (Anupam Kher) invites the four lead characters to his private island in Greece.  The lead characters are multinational but their dil is phir bhi Hindustani – Aby baby from Istanbul, badly in need of a shave, Gillette better take note.  Boman Irani an aspiring prime ministerial candidate from Thailand with perpetually raised eyebrows and a spooky surname – Ramsay,  Jimmy Shergil a perspiring film star with a haunted past from where else but Mumbai and Shahana Goswani – a journalist from London who loves her drink too much.   It turns out they have all been involved in the life and death of Malhotra’s long lost daughter Maya (Sarah Jane) and the reclusive tycoon is maha pissed-off with them.  He offers them vintage wine and then drops the bombshell (thou shalt go to prison) and none of them end up having that precious wine!! What a colossal waste. Kher has a gorgeous house and an even more gorgeous assistant, but before I could ask for his phone number & address, he kills himself.

The IVS (International Vigilance Squad) comes swooping in and it’s then you are confounded with the eternal truth – you can escape from India but you cannot escape Indians.  Even the chief investigating officer Sia Agnihotri (Kangana Ranaut) of an international agency and her incredibly dumb deputy are desis.  No wonder the firangs hate us, we have taken all their jobs!
The story takes off with why-he-done-it and gradually changes to whodunit.  The movie is beautifully shot in picturesque locales of Istanbul and Greece has all the requisite emotions for a perfect flick.
Comedy...Kangana Ranaut with her collagen plumped lips, looking all earnest, twirling her pen furiously and erupting into -  I jusst dun’t bilivvv this!  I don’t believe this either!
Relief...Kangy not saying “You baasturdd!!”  like she did in the movie “Fashion”.
Tragedy....Seeing a wine as old as old as Thomas Jefferson going waste.  Really! Couldn’t Anupam Kher have behaved better as a host and let his guests enjoy their wine in peace rather than pieces?   And seriously guys couldn’t you have just drunk the damn wine before shattering your glasses?
Horror.... Seeing Abhishekh Bacchan without his shirt.
Agony.... Having to bear with Cub constantly playing with an empty box of tic tac ...tuk tukkk tukkkkkk and hearing Tee say every five minutes – Mum I’m so hungry!
Suspense...Mr Idea magically loses weight when he breaks into OP Ramsay’s office and just as quickly regains it when he takes his monkey cap off. The weight is over!
Climax...Even a Farhan Akhtar can pen lame dialogues.  Sample this...Question- Aajkal aap kam nazaar aate hain.  Retort – Apne kabhi chasmaa lagane kaa sochaa hai?
Verdict – If you can ignore Abhishek’s leftover Ravan antics and not squirm at Kangana’s funny accented English, Game is actually not a bad watch.  Agreed the plot was a little far-fetched and twin-obsessed but it was moderately paced and kept the viewers engrossed.  A cool watch, if you are looking for style tips or planning a trip to foreign locales.
Conclusion – Will definitely plan a trip to Istanbul next summer.